02 December – An article featured in yesterday’s Irish Independent which uses data from the National Residential Developments report to show a 300 per cent increase in residential development commencements.

THE race is on to solve the housing crisis with news that a total of €1.47bn worth of multi-unit residential construction projects have got underway in Ireland in the first nine months of 2014 – a 300pc increase on the previous year.

The latest figures from the research consultancy Link2Plans, which analyses planning activity on behalf of industry, shows that a total of 264 multi-unit development projects were commenced in the period from January through to the end of September 2014. When completed, it will result in a total of 6,388 new homes nationwide.

Speaking about the launch of the Residential Developments Report, the company’s managing director, Danny O’Shea added: “When examined on its own, it emerges that Dublin has seen a four-fold increase in the number of residential developments in the same period.”

He said Dublin has seen the busiest construction activity so far with 108 apartment and new home projects getting underway with a tally of 3,610 completed homes pending.

“This is the first time that we have had a figure for the number of homes and apartments actually under construction at any given time.”

However what is worrying for Dublin is that the highest number of projects commenced in quarter one (76) but have petered our since (11 in quarter two and 21 in quarter three).

From January to September 2014, the rest of Leinster saw 74 multi-unit development projects commenced comprising 1,312 units with an estimated value of over €314m.

In the same period, Munster recorded 59 multi-unit development projects with a corresponding 1,314 units which has an estimated value of over €288m.

The combined figures of Connaught and Ulster illustrate a much lower level of residential construction activity in those regions with only 23 multi-unit development projects relating to 152 residential units commenced during the first nine months of 2014 which have an estimated value of just over €27m.

The rest of Leinster and Munster were below the national average with 0.36 and 0.35 respectively, while Connaught and Ulster recorded the lowest number of units with 0.06.

The total number of homes constructed nationwide is likely to be far higher as the Link2Plans survey does not include one-off homes or extensions.

The improvement in the pace of construction outlined in the report is still well behind the 54,000 homes that the ESRI recently estimated the capital will require between now and 2021, suggesting Dublin needs more than 7,000 homes per annum.

€1.47bn worth of residential construction started in Ireland during first nine months of 2014
Outlook 2015: Property train steaming into 2015 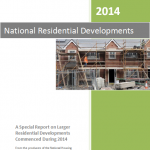